Would you rather run around extinguishing fires, instead of finding out why said fires keep setting ablaze?

No, of course you wouldn’t. Same rules apply to managing problems at work. We can imagine the analogy’s fires as everyday workplace issues, and the act of “extinguishing” as assessing the problem at hand with a quick fix, so that you can go on with your daily duties. Even though most people know that a long term solution is the best course of action, they often focus on putting out one fire at a time. This temporary patch up may work for a while, but it is far away from being the most effective way to deal with arising issues. Finding out why the fire is there to begin with; uncovering the root of the problem with a little detective work is where proactiveness comes into play.

The essence of being proactive is addressing problems beforehand through preventive means: staying one step ahead of the curve, so you are better prepared for what lurks around the corner. Having said that, being proactive in no way eliminates all your problems. It’s not a magic word to make everything that plagues you disappear.

It is simply a mindset of being in control of a situation in a way that helps you anticipate where problems might arise. A mindset that should be acquired by every individual regardless of stature. While we’ve seen most executives understand how crucial this is for long-term performance of their organization, far fewer succeed in putting that into practice.

Getting ahead of the problem

Taking proactiveness a step further is to shape your operating model in a way that enables your employees to find, and even to some extent, anticipate problems.

A good example of this would be an operating model where you categorize your current challenges. This could be practiced by a team that systematically aims to always address problems by priority. Proactively scouring through different issues and investing the time in finding the ones with the biggest impact (perhaps discounted by time), pays off in the long run.

Even if you go through every issue that needs to be tended to, it isn’t always easy to know which of these should be addressed and in which order. By actively categorizing and using your team’s collective knowledge to address these problems, your chances increase in eliminating the problem before it causes long-term damages.

Operating as a proactive team, like the aforementioned example, increases predictability. Having a predictable work environment is important in terms of effectiveness, as it takes away from chaos and lets you focus on what's important instead of just urgent. There will always be problems that act like random variables, they arise without warning and they need to be addressed head on. In an environment where everyone has a proactive mindset, these problems have a higher probability of getting the attention they deserve right away. This reduces the risk of cumulative damages. 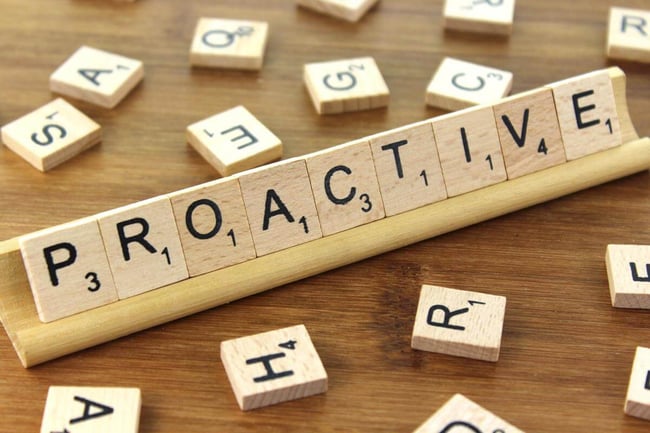 With the importance of proactiveness in mind, there are a couple of important caveats to remember:

One of the most common challenges we've seen from a lot of companies in this area throughout the years is their desire to try and build proactiveness to the business directly with top-down decision-making. With that approach, it's nearly impossible to avoid these two traps once the company has grown to a certain size.

Furthermore, this approach will also inevitably make the employees and whole company culture much more passive and fearful of taking action, the exact opposite of what proactiveness really is all about.

How to increase proactive behavior

So, how can you actually make your company more proactive?

For company proactiveness it is equally as important for all employees to be individually proactive as it is for proactive systems to exist on different company levels. This takes determined steady leadership, individual effort and patience to implement long term solutions.

"It is equally as important for all employees to be individually proactive as it is for proactive systems to exist on different company levels."

Employee proactiveness can be made possible through getting everyone to internalize what proactive behavior really is. This may be done through leading by example and encouraging employees to exercise it, even after the clock is punched out. Proactive lifestyle alterations not only improve the quality of life for your employees but inevitably also lead to the business benefits of proactiveness, namely increased quality and productivity.

Some examples of this behaviour are eating healthy to prevent lifestyle diseases, oiling engines to prevent jamming, or simply fixing your sleep rhythm to reduce chronic sleep deprivation. Unnecessary chronic stressors, such as these, can often be eliminated through preventive measures. Doing this at home increases the likelihood of applying the same mentality at work and vice versa. It is a mindset that improves quality of life as much as an effective tool for building a more productive company.

Although individual effort is important and thus must be encouraged, overall company proactiveness should be the ultimate goal. One way of inducing company proactiveness on a structural level is by having all teams throughout the company to implement proactive operating models. This means, if possible, teams taking ownership of building and maintaining a proactive approach for assessing different internal matters: be they concerning time-sensitive or non-urgent but important issues, such as responsibility distribution. Proactively approaching matters means taking the time to always assess the situation holistically to find the most effective sustainable solution to it. This will eventually make the team work like a well-oiled machine rather than an inefficient gear-cruncher.

One way of proactively approaching a wide range of different matters is called strategic thinking. It is a method for increasing effectiveness, which can be a useful tool in a variety of different company operations. It means finding cost-effective solutions to systems that have been overcomplicated or are otherwise inefficient.

To think strategically is to break, for example, an operation down to its smallest building blocks and rebuild it using only the pieces that truly add value towards the ultimate goal. This way all the unnecessary pieces or “in real world terms”: company levels or functions, are removed from said operation. This doesn’t mean that most workers are useless to their companies, it simply means that it might be more cost-effective to use them elsewhere.

Taking away unnecessary, or ‘delegable’ roles is especially important when it comes to those in leading positions. More often than not, executives manage tasks that could easily be passed down to their subordinates according to a Harvard Business Review article on strategic thinking. More than half of their reviewed executives (in a 10-year longitudinal study) felt as though they had to manage tasks beneath their level.

“In our 10-year longitudinal study [...] 67% of executives said they struggled with letting go of work from previous roles. 58% said they were expected to know details about work and projects they believed were beneath their level. “
- Ron Carucci

Strategic thinking isn’t something that should only be exercised by big executives in highly responsible roles. It should be exercised by everyone, regardless of one’s place in the company hierarchy.

Not doing so is much more than just a petty nuisance in terms of efficient time consumption. Every employee should aim to take autonomous charge of tasks that are in their range of expertise. This will lead to not only better decisions but also lighten the collective unnecessary workload, which leads to more effective decision-making.

This, especially for executives, increases hours on the clock that can be spent focusing on tasks where they can better make a difference. It is acceptable to take autonomous charge of tasks you’re capable of handling, as is letting your subordinates “spread their wings” and execute assignments without micromanagement. As long as everyone understands the big picture and current priorities.

A good example of proactive thinking is systematic idea management which exemplifies the fundamentals of sustainable company development.

Idea management basically means implementing a systematic method for gathering ideas and insights from all employees of a company. It's about creating an environment where every idea is heard, preventing the most valuable of them from ending up as nothing more than the flickering of neurons. An environment where the decisions that are made, and more importantly, the rationale behind making them, are transparent.

Harvesting these ideas from groups of thousands is no easy task. There are many pieces for the puzzle to fall in place and the process to run smoothly: individuals’ motivation to share ideas, an easy-to-use-platform for sharing said ideas, open and constructive dialogue for polishing those raw ideas into refined innovations, an efficient process for deciding on which ones to implement, and of course the resources for actually implementing the ideas.

While all of the aforementioned attributes are crucial, the part that a majority of our customers find the most challenging is facilitating an open dialogue.

An open dialogue about the ideas is very important for proactive employee self-improvement. Creating this kind of “feedback to feedback” system creates a safe space to mold the ideas as much as the individuals behind envisioning them. Having an ongoing transparent dialogue creates a sense of a communal social environment where users can mold their ideas with the help of professional guidance. This not only ensures that the quality of the ideas is much more refined, but also serves as a nutrient rich petri dish of proactive growth, both on an individual and company level.

Focus on bringing together all three sides of proactiveness: individual, operational and strategic. These three working together create a system that is truly proactively sound. Having all individuals practice a proactive mindset creates a base for proactive operating models to work to their full capacity. This setting then paves the way for strategic proactiveness to thrive, resulting in an effective organization capable of quickly adapting to change.

The best results are often gained through collective effort and this case is no different. Having only a chosen few in important roles show independent initiative is a common misconception that should be scratched. Proactiveness needs to be exercised by everyone, regardless of their place in an organization.

Don’t run around extinguishing fires one at a time. Uncover the obvious fire hazards and keep the fires from ever occuring in the first place!