What Is Open Innovation 2.0 and Why Does It Matter?

Open innovation is a model based on the thought that companies can really benefit from the free bi-directional flow of ideas and innovations from both within and outside the company.

But what is open innovation 2.0. and why does it even matter?

There has been a dramatic shift towards a more open way of doing R&D after the introduction of open innovation in many fields. Companies are complementing their innovation processes and R&D with open innovation, getting new ideas and inputs from outside stakeholders, for example from users and startups.

However, there is still great inertia hindering the process within companies even as open innovation is almost universally seen as a great way to speed up innovation.

The Short History of Open Innovation

Before, companies tended to innovate strictly within their organization and have little or no collaboration with external parties. Open innovation changed this and suggested that innovation funnels should be open to ideas from external sources, as well as be prepared to let go of some of the ideas the company won’t focus on.

This meant that companies, such as Cisco Systems, started to collaborate with start-ups and other external parties. In this collaboration model, bigger companies typically work with and fund start-ups to learn from and potentially acquire the startups if the business starts to look promising enough.

Traditional R&D typically has a very specific focus, whereas open innovation projects take all ideas into account. Even if a certain idea can’t be used in the context of a certain project, it might still be applicable somewhere by someone else.

After this initial version, open innovation has developed a lot. Nowadays there are plenty of open innovation challenges and initiatives, like these held by GE, that take other companies into account but also activate other stakeholders, such as product users or employees within the company that don’t work on R&D per se.

Recently, an aspiring new model, Open Innovation 2.0, has gradually gained steam. This model challenges companies with a vision of even more open collaboration with a vision of many organizations and individuals working together in a network setting.

Traditional open innovation is usually restricted to a funnel-like linear model that organizations use to include more stakeholders in their innovation processes. In Open Innovation 2.0, innovation happens in ecosystems or networks that go far beyond traditional organizational boundaries. There can be several organizations, individuals, universities, and governments collaborating with one another. Together the network can create value in a way no organization could do by itself.

There are always many different innovation funnels present in a single Open Innovation 2.0 network due to the sheer number of stakeholders involved. Some of these funnels might be in the same companies but some aren’t. This interfunnel collaboration is the source of much of the synergies present in the model. It creates diversity in innovation.

Together the network can create value in a way no organization could do by itself.

For example, Cisco works closely with startups in the areas that are strategically important for them. Cisco has, of course, internal R&D funnels connected to these areas, but they do benefit from startups working on the same area as they create synergies within the network.

The Open Innovation 2.0 model emphasizes the diversity of the collaborators. There's evidence showing that diversity and multidisciplinarity in innovation is likely to result in both the highest and lowest quality outcomes. One of the reasons for this is that in a more diverse setting, people feel more at ease to share their thoughts and ideas. Thus, if you'd like to maximize your chances of creating breakthrough innovations, embrace diversity.

One of the obvious methods for creating openness and facilitating this kind of diversity is to create environments, such as open facilities or campuses. These kind of spaces allow unlikely people to meet, resulting in new ideas and innovations.

However, like I wrote in my previous blog post, spatial collaboration might be a good starting point but usually isn't enough. Having the kind of technology that we do, networks often interact mostly without the limitations of physical space. Hence, innovative environments include all kinds of “virtual” platforms, like the Lego creator site, which they use to activate and involve their customer community. 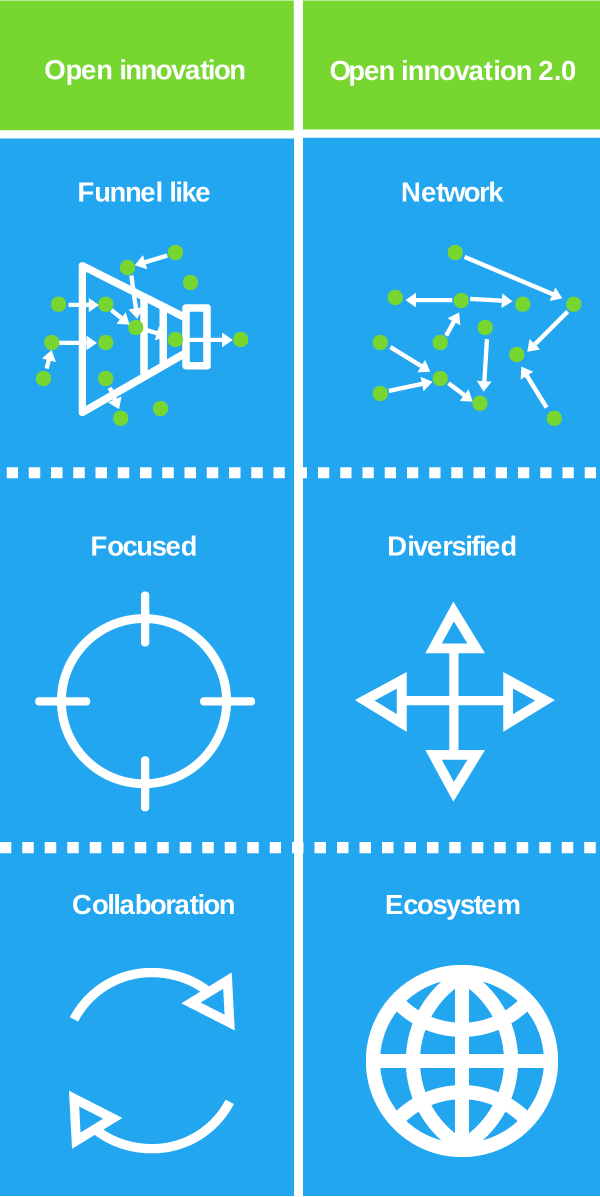 Besides the chance of generating breakthrough innovations, there are also other benefits in being involved in an Open Innovation 2.0 ecosystem.

First of all, these networks engage tons of smart people outside your own organization. Thus you can have many more intelligent people within your reach working on the same problem than you ever could just inside your company.

Second, open technologies often tend to scale fast due to the fact that they are open by nature, just think of the rise of the internet and open source software as examples.

These networks also provide a great opportunity to get to know potential users and partners, providing you with opportunities that you otherwise wouldn't have realized.

Participating in an Open Innovation 2.0 network can also be used as a resource efficient way to learn how new concepts work in practice and where the challenges lie. You thus won’t need to set up as many internal high-resource, high-risk projects just to learn since you can also learn from the mistakes of others in the network.

Your network allows you to also get different points-of-view leading to new insights. So, even if you need to sacrifice some resources to take part in these open innovation networks, it will most probably pay off in the long run in the form of not only new contacts but also learning outcomes.

Like mentioned above, diversity results in breakthrough innovations more likely than just collaborating within a single disciplinary.Diversity doesn’t here refer to only disciplinary differences but also, for example, ethnical diversity. It’s generally thought that multidisciplinary collaboration has far more pros than cons.

Diversity can also refer to the cognitive differences that come with different organizational cultures, a way to avoid groupthink. It’s evident that people who've been at the same organization for a long time have more or less similar thoughts on how things should be done, especially in comparison with people from different organizations.

This is the kind of diversity that you can easily achieve by collaborating with people from outside of your organization. This is actually often one of the biggest reasons for hiring consultants!

Networks allow you to effectively be involved in lots of things with reasonably low resources committed to each individual effort.

This means that you have a chance to be a front-runner on whatever the things are that your network specializes in while still hedging your bets to some extent. When you finally see something new really work and provide value, you have the possibility to up the ante and get a head start on the competition.

As an example, Nivea activated its users to develop a new kind of deodorant that was the first on the market to not leave white and yellow stains on your clothes. Users were included in the R&D process online, where they shared their antiperspirant related stain problems and home remedies they had found.

The collaboration helped Nivea determine the type of product the users needed and understood how and why stains appear in the armpit areas of shirts and how to prevent them. The product was not only the first of its kind on the market but also really delivered on the value part, thanks to the users having a great impact on the end result.

This post is a part of our Open Innovation blog-series. In this series, we dive deep into the different areas of open innovation and cover the aspects we think are the most important to understand about open innovation.

You can read the rest of the articles in our series covering open innovation by clicking on the button below. Don’t forget to subscribe to our blog to receive updates for more of our upcoming content!