Interview with Jeremy Gutsche, the author of Create the Future

This time around we’re going to have a slightly different kind of post. I recently had the opportunity to read Jeremy’s new book and interview him. I hope you’ll find the discussion interesting and useful!

I personally found the book to be full of inspiring stories, but also a number of practical tools that you can take into use in your own innovation work, which makes for a nice combination.

The book also includes an updated and revised version of his earlier book, Exploiting Chaos, which are nicely tied together to form a framework for, well, “Creating the Future”.

However, without further ado, let’s get to the actual interview!

1. I’m sure many of our readers are already familiar with some of your work, but for those who aren’t, could you tell us a little bit about yourself?

I’m the founder / CEO of Trend Hunter, which is the world’s largest trend platform and an innovation consultancy.

In short, we leverage 3.4 billion views of data and 170,000,000 visitors like a giant innovation focus group to help people find better ideas faster. This has led us to a world of helping hundreds of brands on thousands of research projects and projects to predict and create the future.

Half of our work is on identifying opportunity and the other half is working with brands, billionaires, and CEOs to help make it happen… and we’ve learned a lot along the way, which led to an archive of tactics, tools, workshops and frameworks that provides the foundation for this book.

2. What led you to write Create the Future and what is the book about?

Everyone wants innovation to happen, but most people get caught in the path of repeating whatever led to last year’s success.  Smart people, in particular, miss out on opportunity so close within their grasp because of 7 factors that blind us from seeing and capturing new opportunity.

Accordingly, I wanted to make an end-to-end handbook on tactics for disruptive thinking, innovation and change. I didn’t want to write a book suggesting innovation is important, but rather, a manual full of frameworks to actually make it happen – and I wanted it to effectively be my life’s work in one book.

For added context, in 2008, I wrote an award-winning book called Exploiting Chaos – 150 Ways to Spark Innovation During Times of Change.  That book was an end-to-end book about innovation tactics, and it was my big break, because suddenly I became the chaos guy right when the world became chaotic.

I started getting called in by Fortune 500 CEOs to help them with their periods of chaos. You help one, get recommended to another, and soon I was working with a dozen CEOs, then 100, then 200, etc. I learned from each experience, and when I look back at that book, I wanted to re-write it with all the new tactics I’ve learned and all the missing pieces I wish I’d included. 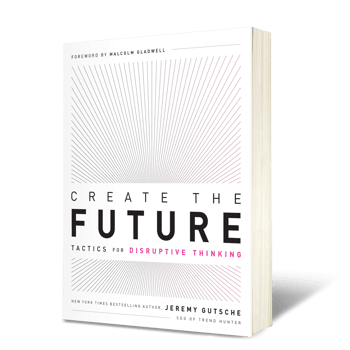 After working with hundreds of clients, the big piece I felt was missing was the ABILITY TO CHANGE.  We talk about innovation and change as being inter-related, but what are the actual tactics you would use to make change happen?  What is the impact of all the traps that exist from our resistance to change?

It turns out, there are a lot of these traps, and there are exact techniques you can employ to better.

I felt that was the most important single aspect in every one of the projects I was a part of.  So the first side of the book, Create The Future, is all about that missing piece of advise on the most important thing needed to make your idea a reality: Tactics for Disruptive Thinking.

3. I really enjoyed how you’ve openly shared some of your own innovation struggles. What’s the one thing you wish you’d learnt earlier?

In the early days of Trend Hunter, we experienced a lot of success getting website traffic, which caused us to get caught in our own path of simply pursing more views.  At one point, we had more traffic than almost every newspaper on the planet, but we didn’t have the business model to support our costs.

Then, around 2010, we had a very difficult year when our advertising agency partners collapsed, putting us in a tough spot.  We had to scramble to figure out how to pivot the company, combing through all of our past emails and client interactions to see if there was a nugget of gold along the way.

I ended up stumbling on an email from a client (“Sarah”) at Nestle who said: “We love this Trend Hunter thing, can you make a custom version for us and maybe make some reports and workshops if we paid you??” I hadn’t even replied and 2.5 years had past. Anyway, I replied… we pivoted our business… and 700 clients later, it appears that I should have replied to Sarah years earlier. I find myself imagining how much further ahead we would be.

However, I was stuck in a path, and when things are going well, it is too easy to keep repeating past decisions. To be better at seeing my opportunity, I needed to: be more open the possibilities, talk more to my clients, and more-deeply question whether or not I was already on my optimal path.  I needed to think more disruptively!

4. The 7 Traps of Path Dependency is one of the key concepts in the book. Which of these would you consider to be most common and/or damaging ones?

In my opinion, the most powerful concept is actually the combination of the “Traps of Success” and our “Neuropsychological Traps”. In short, when we are successful, we stop hunting for new opportunity.

However, when you combine that with the fact that our brain does not even want to SHOW us new pathways of opportunity, we end up in a really dangerous rut.

We end up getting caught in a groove, blind to the fact that we have so many other options in front of us. This combo of traps explains why so many successful and iconic brands end up getting disrupted by technologies they may have even played a role in creating.

The good news is that there are all sorts of tactics you can do to check how much your brain is limiting you, and to prevent yourself from getting caught in a groove.

5. You’ve worked with many of the top corporate innovators on the planet, what would you say are the most common mistakes you see them make?

Most people don’t realize how close to new opportunity they actually are, particularly when the opportunity is in their own market.

That seems counter-intuitive, but the reality is that new opportunities are subtle and awkward, making them easy to dismiss, especially for people who are already ‘doing well’ in a given market: “We tried that. We tried something like that. We know that won’t work. We already have a profitable solution there. That technology is developing slowly, but we have our eye on it. We paused that test…”

Recognize the blinding power of your own expertise and assume more potential in rival solutions and awkward new ideas.

6. You’ve highlighted the value of well-ran workshops. Still, many companies seem to be struggling with the creative workshops they hold. What are your top tips for getting more value from them?

There is a broad range of performance that a person can have from running a workshop with their team.  A workshop can flop and feel like an awkward waste of senior people’s time, or it can create alignment, buy-in and actionable next steps.

Given the polarity of outcome, learn to invest the time in learning the proven, battle-tested tactics that create results. When I run a workshop for world-leading innovators like Google, Coca-Cola, NASA, Disney or Universal, they tend to take the workshops more-seriously because they recognize the extreme value that can be achieved by a well-run workshop… 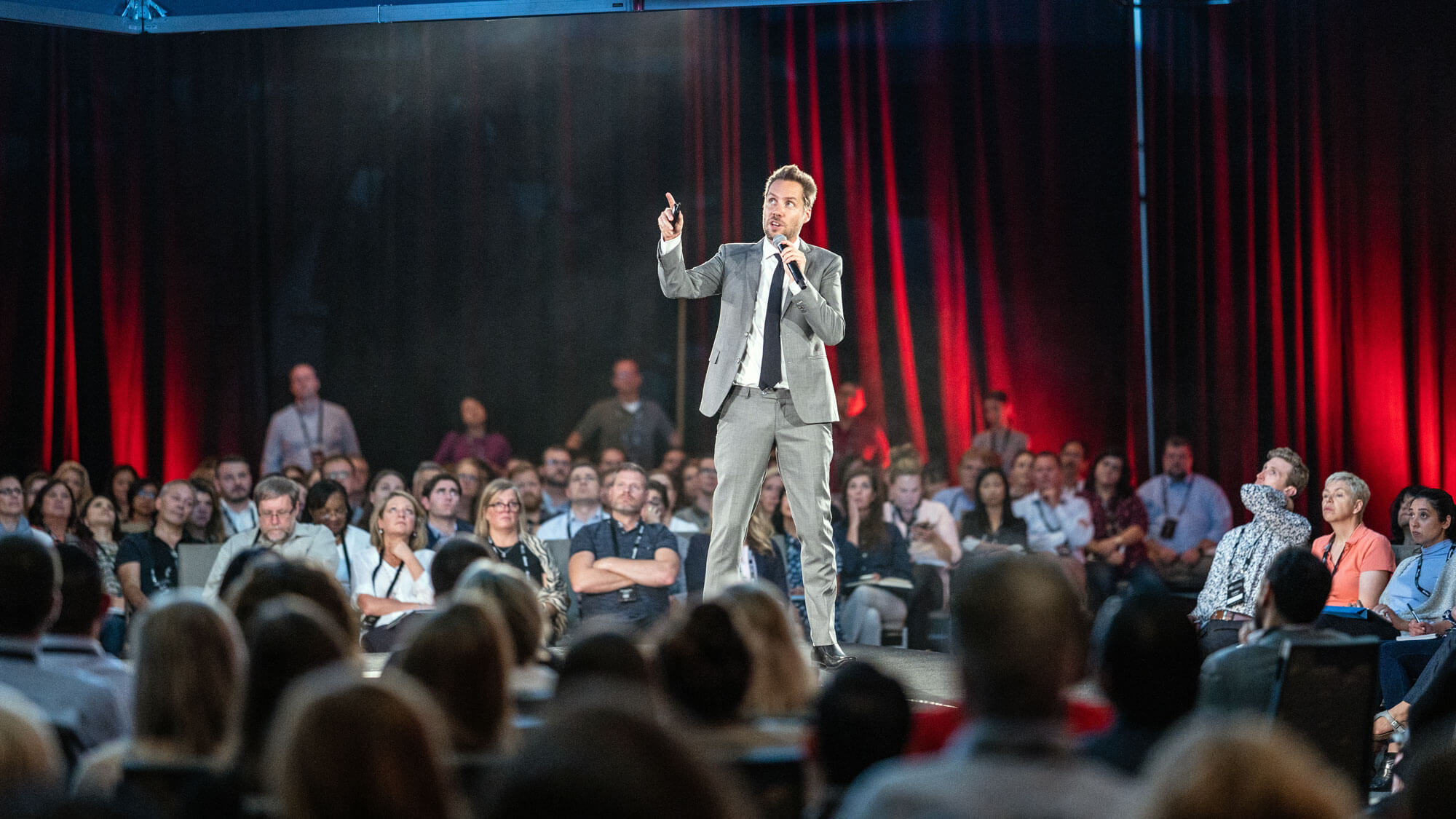 So they invest more personal time into learning workshop tactics that increase the potential of getting results. You should too! Furthermore, there are multiple benefits to a workshop. In addition to the end goal of delivering ideas and next steps, you are actually training your brain to be better at looking at problems from multiple perspectives. You are training yourself to be more creative!

7. If one of our readers is having trouble building a sense of urgency around innovation in their organization, what would you suggest they do?

To create urgency, a workshops I love (which is in the book), is called Utopia vs Dystopia.

In this exercise, I get teams to imagine a world 5 years from now where their organization has fallen apart (ie. Dystopia).

What are the factors that you realistically think could lead to such a scenario? Did you not recruit the next generation of talent? Adapt to technology quickly enough? What would cause such an outcome?

After 10 minutes or so, perform the opposite exercise, imagining what factors might lead to your utopia. More often than not, this exercise will create urgency because leaders will start to realize how likely the dystopia scenario will become, if change does not happen.

Meanwhile, it will become clear that utopia requires work. The next step is to filter down from this list to the top three areas for innovation, which is an exercise that creates alignment and a pathway to next steps.

8. Thank you for your time Jeremy! Any closing thoughts or words of wisdom for our readers?

In our era of rapid change and opportunity, you are much closer to your next level than you probably realize.

That next level might be a bigger role, new product, new service, or just a different way of doing things…

But the simplicity is that you are closer than you think. The issue is that you are probably hindered by the 7 traps of path dependency. Learn to overcome those traps with disruptive thinking, and you will be reach new levels of success, faster. You will… CREATE THE FUTURE!

Jeremy Gutsche is the author of Create the Future: Tactics for Disruptive Thinking (Fast Company Press, March 10, 2019) and CEO of Trend Hunter, the largest trend platform in the world.

PS. EDITOR'S NOTE: What did you think about this interview format? Should we do more pieces like this? Please let us know!

Subscribe to our blog and join the 40k+ other innovators who read our latest stories on innovation, leadership and culture every month.