14 of Our Favorite Idea Management Tools

Idea management is the process of creating ideas and seeing them through to implementation in as effective a manner as possible.

There’s obviously quite a bit of different steps involved in this process, some of which can be quite challenging to do properly without the right tools. 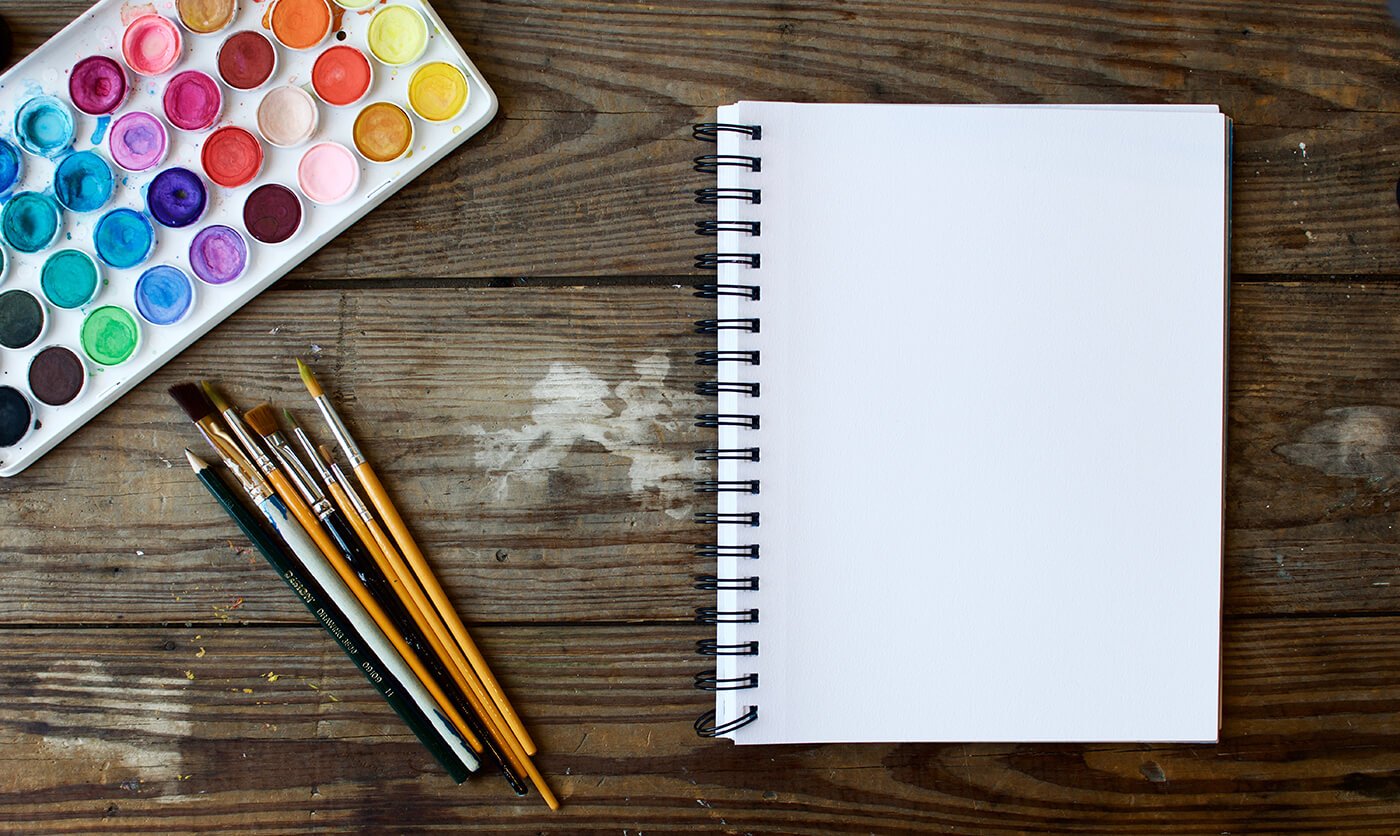 As the importance and appreciation of innovation has recently become even more important, there’s been a huge influx of tools to help in different parts of this process. These tools can be a tremendous asset to help individuals and companies get the most out of their ideas.

The four stages in the lifecycle of an idea

In this post, we’ll look at idea management from the point of view of working on individual ideas up to the point where it is a refined business concept that can actually be implemented, as opposed to looking at the big picture. If you’re interested in getting the big picture right when it comes to managing ideas, I’d recommend this post.

When it comes to the journey of an idea from the initial thought to a refined concept, there are a number of different phases involved, which in most cases are very similar regardless of the business or type of idea in question. We’ve broken the process down into four stages to illustrate the distinct activities involved in working on most ideas. There are obvious exceptions to this classification, but it's still a solid starting point for most.

So, without further ado, let us provide you with our take on some of the best tools for each of the stages in the ideas’ lifecycle.

An idea management software serves as the backbone of your idea management process. It is where you’ll collect the ideas, discuss them, evaluate and prioritize them, and keep track of their progress, as well as the strategic direction of your ideation activities. 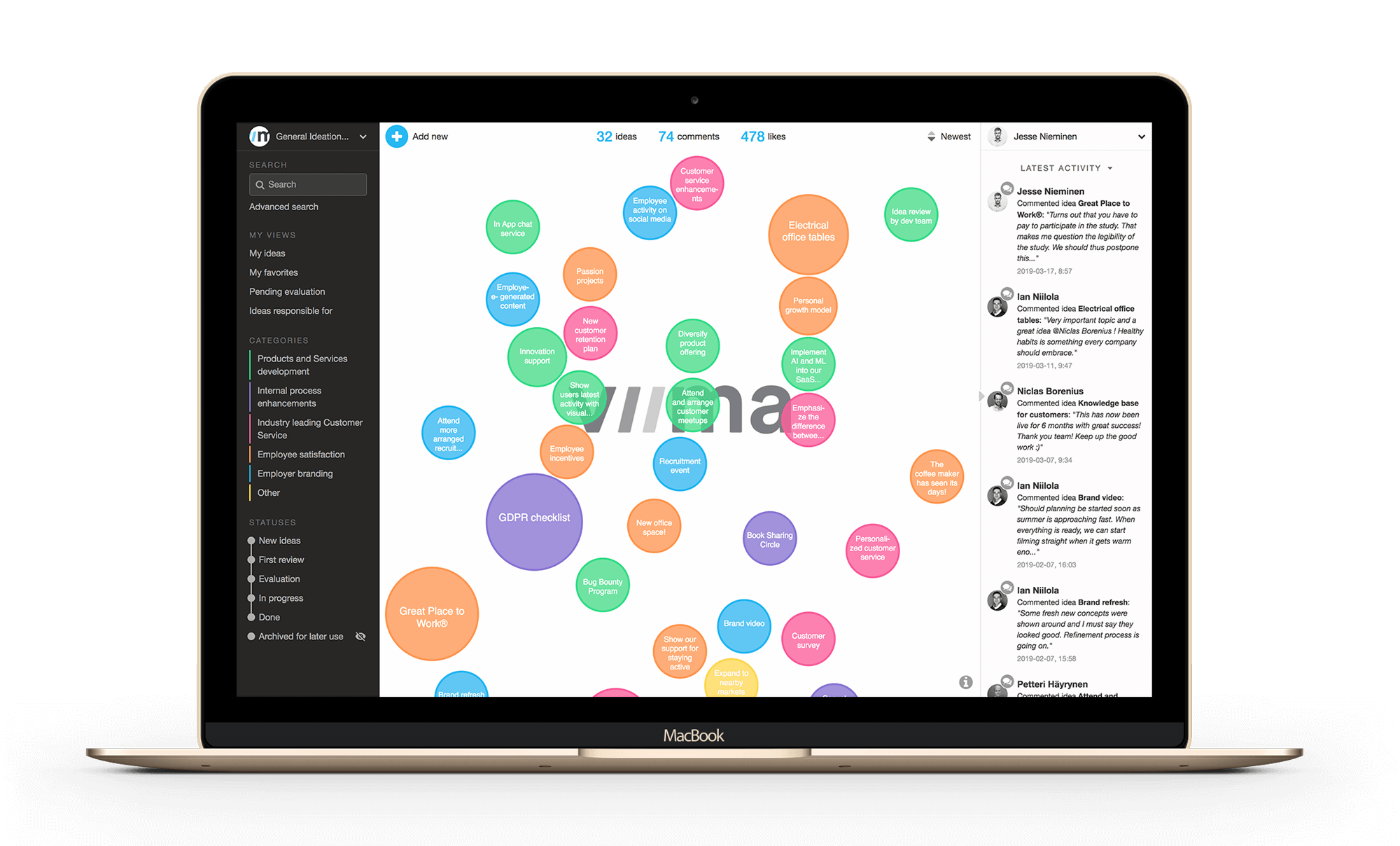 We might be a bit biased on this, but we obviously think Viima is simply the best tool for the job, and our customers agree. Viima is the highest rated idea management software in the world based on customer reviews.

We’ve also made Viima forever free for up to 50 users so that you don't have to just take our word for it, but can witness this for yourself.

Many people mistakenly believe that the hard part is coming up with great ideas. This misconception typically arises from people who aren’t used to creative work. Creative professionals actually come up with ideas all the time and there are dozens of tools out there that can help you do the same. Here are some of our favorites:

Opposite Thinking is a tool that makes it easy for you to question long-held assumptions related to your business, which is key for coming up with those infamous “out-of-the-box ideas”. It’s a useful tool to consider if you feel your team is stuck with the traditional mindset of “this is the way things have always been”.

Brainstorm Cards are a useful tool created by the Board of Innovation for coming up with dozens of new ideas related to whatever challenge or problem you are currently working, in a manner of minutes. They help you consider external factors such as: societal trends, new technologies, and regulation in the context of your business. This allows you to generate a great number of ideas with little effort.

Many of the ideas won’t obviously make sense, but this tool can still be very beneficial for getting you out of the rut if you’re suffering from a creative block. 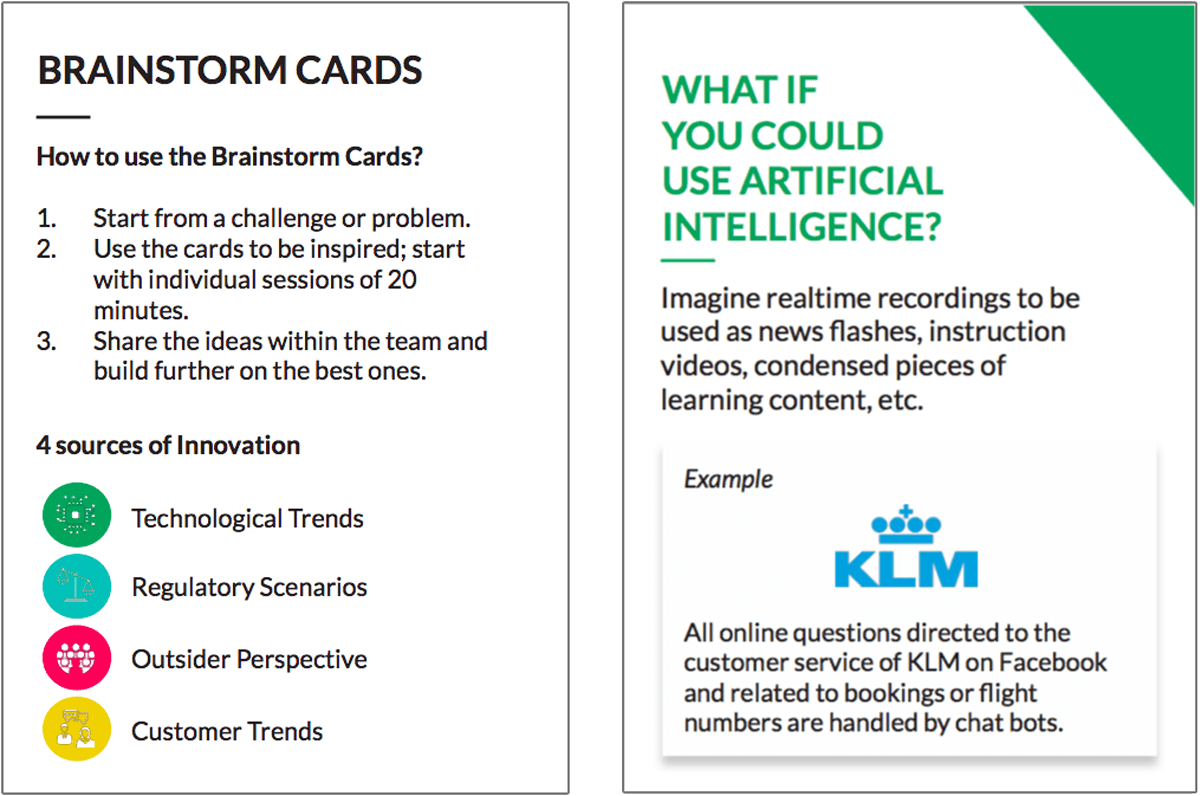 Analogy Thinking is a technique for analysing a successful business, identifying what makes it great, and then applying those same principles for your business. This is an effortless method for coming up with business ideas that are pre-validated.

I’m sure you’ve heard of the countless start-ups that are the “Uber for [insert industry here]“. This is exactly the method every one of those companies has used. However, be warned that since this is such an easy and intuitive tool to use, the obvious combinations are likely to be highly competitive.

Our recommendation: Opposite Thinking + Brainstorm cards

Tools for developing a business concept

A business concept or model is what defines how your idea would actually work in terms of both the larger concept, as well as the business model.

Some ideas, like those regarding incremental improvement, might not require too much concept development, as they are likely to already be highly concrete and well-thought out by nature.

However, for most ideas that are about a new concept or business, it’s usually a good idea to build a business concept or model. This helps you approach it in a holistic manner, which aids in identifying obvious holes.

The Business Model Canvas is a well-known template created by Alexander Osterwalder that is used by both start-ups and larger companies to map out the elements and assumptions related to a business idea or concept. It contains a total of 9 elements in 4 different areas: Infrastructure, Offering, Customers, and Finances. You can watch the video below for a brief introduction of this tool.

Lean Canvas is a popular adaptation of the original Business Model Canvas created by Ash Maurya. It replaces four of the 9 elements to focus more on the problem that you are trying to solve, as opposed to the more solution-oriented approach of the Business Model Canvas.

Lean Canvas is thus perhaps better suited for those operating in an environment with a high amount of risk and uncertainty.

Tools and techniques for prototyping

The idea, no matter how refined, is just the beginning and really worth nothing in itself. No matter how original you think your idea, there have usually been dozens or hundreds of people who’ve had the same idea before. They’ve simply failed to execute it, or to even start working on it.

So, once you start working on the idea, it’s crucial to figure out whether the assumptions related to the idea itself, as well as your chosen business model, actually apply in the real world.

The best way to do this is to simply build a prototype or minimum viable product (MVP) of your solution and then test it with your target audience.

You should always aim to build as lightweight a prototype as possible, as long as it allows you to test the most significant assumptions related to your idea. These prototypes can be anything from paper prototypes to interactive digital ones, depending on what kind of an idea it is.

Paper prototypes are simple low-fidelity drawings used to simulate and test user interfaces. The point is to keep these at a very-high level, which forces the test subject to focus on the steps and different pieces of information involved in the experience, as opposed to what the final product looks like.

Fake it ‘til you make it (sometimes referred to as the Wizard of Oz method) is a term we use to refer to the kind of prototypes where a person conducts a part of, or an entire, service that is supposed to be automated or implemented later on to establish if people are interested in and willing to pay for such a service.

For example, if your business idea would be to build a small diving robot that can inspect the foundations of piers in harbours, the first step would be sell this service to harbour owners and just have a diver do the job manually as opposed to sending a robot. 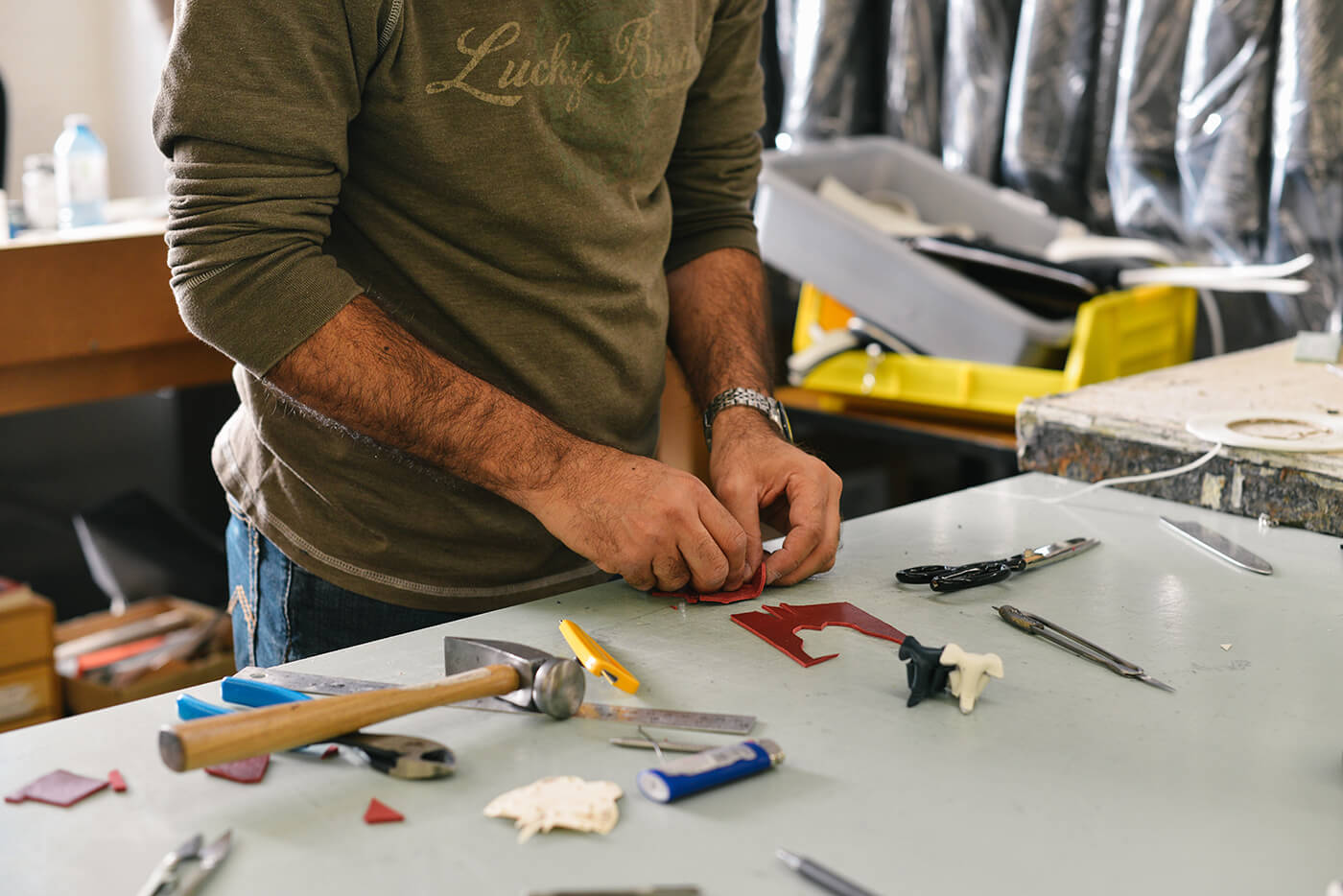 Sketch is a great tool for creating digital designs. It’s simple to use but still very powerful with a strong community that’s built hundreds of extensions to further boost its capabilities.

Sketch Designs can easily be made into interactive prototypes by using either Origami or InVision. These tools allow you to add navigation between the different layouts in the app, and even support more complex interactions such as gestures and animations. They've made it simple to create prototypes that feel exactly like a real app or website would.

Adobe XD is a recent addition to Adobe’s extensive portfolio of design tools. XD is meant to be used for designing digital services and rapidly building prototypes based on those designs. It doesn’t yet have the same level of community as the Sketch ecosystem has but it’s still a solid tool for the job of prototyping.

Our recommendation: Fake it ‘til you make it + Sketch + InVision

Regardless of which methods you end up using to prototype your idea, you should aim to do this in a systematic manner to keep track of the assumptions you have regarding your concept, product, or service, as well as the measurable results from testing your prototypes. This is called idea validation.

While you can use a simple spreadsheet or one of the tools below for keeping track of these results, an idea management software with an idea evaluation features is going to make the job of collecting the data to a single place much easier and enables effortless comparison between different ideas, as well as simply allowing you to keep track of everything in one place.

Regardless of how you end up documenting your validation work, make sure you start from the most significant assumption first. This is often the part that will either make or break your business concept.

Validation board is a tool that can be used for keeping track of the key assumptions you’ve made, and the results of the test done to validate those assumptions.

Lean Service Creation Validation Canvas is very similar to the Validation board, but also contains a simple tool for considering the reliability of your validation work, which can prove to be a useful reality check.

We hope you found this list of 14 of our favourite idea management tools useful. We aim to keep this list up-to-date so that it serves as a timeless guide for our readers.

So, if you think there’s a tool we’ve missed, please let us know!

Also, if you're looking for an idea management tool, be sure to check out Viima's free plan.

This post is a part of our Idea Management blog-series. In this series, we dive deep into the different areas of idea management and cover the aspects we think are the most important to understand about managing ideas.

You can read the rest of the articles in our series covering idea management by clicking on the button below. Don’t forget to subscribe to our blog to receive updates of our upcoming content!

The Best Online Innovation Courses to Unlock Your Innovation Potential

Diana Porumboiu
Read More
What Is Innovation in Business and Why Is It So Important?

Jesse Nieminen
Read More
What should an idea management software do? - A buyer's guide